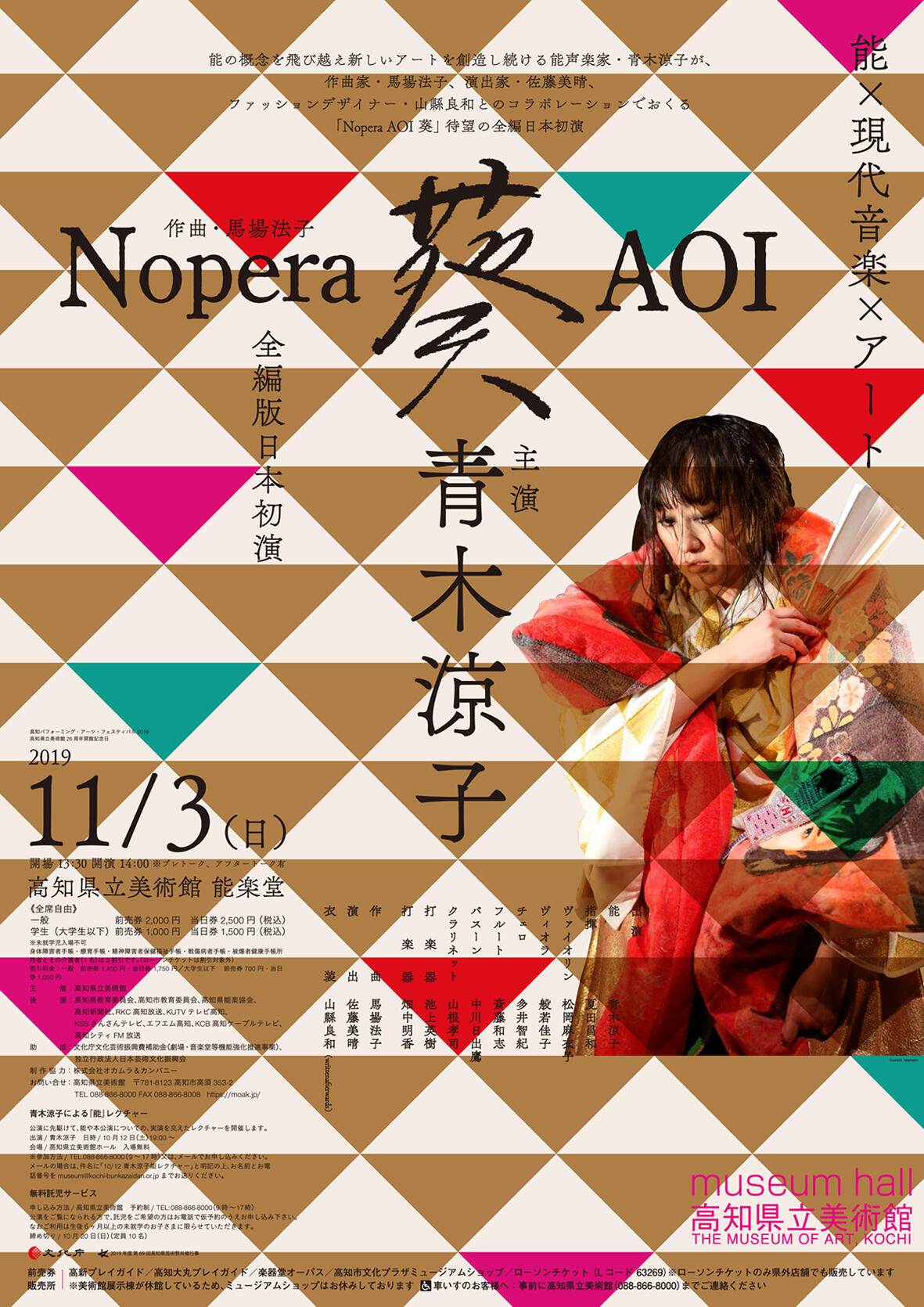 Language: Japanese *Synopsis in English on paper will be available

*Children of preschool age or under will not be admitted to this concert.
*For wheelchair users: please contact the museum in advance for securing a seating area.

*Attention: MUSEUM SHOP and Cafe at The Museum of Art, Kochi are also currently closed as part of repairing work area at our exhibition building. Thank you for your understanding.

The eagerly awaited complete staging, for the first time in Japan, of "Nopera AOI" based on collaboration by Ryoko Aoki, the Noh singer and performer who continues to create new art transcending the concept of Noh, with the composer Noriko Baba, director Miharu Sato, and fashion designer Yoshikazu Yamagata!

At the focus of worldwide attention, the Noh singer and performer Ryoko Aoki is presenting a new world of Noh born from the fusion of traditional Japanese culture and contemporary music, both inside and outside Japan. Through collaboration with Noriko Baba, a spirited composer now residing in France; Miharu Sato, a theatrical director who has handled numerous opera productions; and Yoshikazu Yamagata, a prodigy who is one of Japan's leading fashion designers, she is going to perform an unprecedented "Nopera" work on a Noh stage.

Inspired by "Lady Aoi," a Noh play based on the corresponding chapter of "The Tale of Genji," this work was first staged in France in 2016. The direction was redone for the long-awaited first performance of the work in Japan in its entirety.

Don't miss this opportunity to experience the new world woven by the fusion of Noh, contemporary music, and art.

"Nopera AOI," a hybrid of Noh and contemporary music, is a drama of enmity, jealousy, humiliation, vengeance, and desperation enveloping a grief-stricken young woman, and the struggle between her emotions and reason. It is based on "Lady Aoi," a Noh play that depicts the inner world of Lady Rokujo, whose passion was so intense that it transformed her into a vengeful spirit. It expresses the subtle changes culminating in her death by means of sound, through application of various phenomena that act on the auditory sense, such as the rustling of actor's garments, shuffling of feet over the floor, and snap of folding fans quickly opened and closed. The bowed flexatone calls to mind the "azumi yumi," a Shinto bow made of catalpa that is used to conjure up spirits. The string telephones hanging to the rear of the stage are sometimes synchronized with the mobile phone "played" by the "shite," and combine a visual metaphor with an auditory illusion.

Aoi-no-ue (Lady Aoi), the formal wife of Hikaru Genji and a daughter of the Sadaijin (the Senior Minister of State) family, has been possessed by a phantom and seriously ill. Although her family has tried various cures to help her recover, nothing has worked. In order to clarify the identity of the phantom, they have finally decided to invite Priestess Teruhi, master of the art of azusa, which calls forth phantoms with the sound of a bow made of Japanese cherry birch (azusa-yumi).

The phantom, who is trapped by the priestess's prayer and appears, is the vengeful spirit of Rokujō-no-miyasudokoro (Lady Rokujō), the wife of a deceased crown prince and a lover of Genji. Rokujō is a very sophisticated noble lady. However she has recently lost Genji's attention and is rarely visited. Furthermore, she lost a contest for precedence to Genji's wife Lady Aoi, when her carriage was pushed aside at the time of Kamo Festival, when she secretly went out to see Genji in the festival parade. The spirit of Lady Rokujō thus complains of her growing agony, which can go nowhere. Looking at Lady Aoi, she is torn by jealousy and beats Aoi to take her soul out, just as a wife hates and beats her husband's young lover.

The subjects of the Sadaijin family are awed by the fury of Lady Rokujō and rush to invite a priest, Yokawa-no-kohijiri, who is a powerful practitioner of Shugen-dō. When the priest starts a sacred invocation, the jealousy in Lady Rokujō's heart embodies itself as a female ogre. Turned out to be an enmity personified, Lady Rokujō assaults not only Lady Aoi but also the praying priest. After a bitter fight, the vengeful phantom of Lady Rokujō was overcome and calm down. Lady Rokujō's spirit became peaceful and capable of becoming a Buddha.

Although the title of this drama is "Aoi-no-ue (Lady Aoi)," the lady herself does not appear on the stage. A kosode is placed at the center front of the stage to embody Lady Aoi, who is suffering from the phantom without resistance. The core of this drama is the affection and jealousy of Lady Rokujō, who cannot help being an ogre. Since she is an ex-crown princess, the actor needs to express dignity in her eerie spirit even after she is transformed into an ogre. At the ending of maeba, she throws a fan and disappears while covering herself with a kimono. Particularly, in this scene, the actor has to express her emotional upsurge while moving gracefully to maintain her dignity.

This drama involves various devices to nurture the atmosphere of the Tale of Genji. The climax of utai in the first half of the drama includes names of the chapters of the Tale of Genji. Also, in the Muromachi era people felt that the direct cause of Lady Rokujō's jealous struggle with Lady Aoi was that she lost the fight for precedence for her carriage against Lady Aoi at the Kamo Festival. Following this interpretation, Lady Rokujō enters the stage riding on a broken carriage in the first half of the drama.

For Download - STORY PAPER : Aoi no Ue (Lady Aoi):
Story Paper presents noh chant stories in modern speech, with story outlines, highlights and more using Adobe PDF format, which can print out and zoom in. Print out the pages and take them with you when you see the actual noh performance.

Ryoko Aoki, Noh singer and performer
Aoki is creating new musical pieces that take "utai," the vocalization in Noh, as its material, and performing them extensively, both inside and outside Japan. In extensive action around the world, she has been vigorously exploring the possibilities of "utai" through premiere performances of works of contemporary music by composers such as Peter Eötvös and Toshio Hosokawa, performances with orchestras, and appearances in operas. More specifically, she has appeared in an opera at Teatro Real de Madrid and performed with world-class orchestras including the Royal Concertgebouw Orchestra, Orchestra of the Maggio Musicale Fiorentino, Ensemble InterContemporain, and Munich Chamber Orchestra. She has also participated in musical festivals in various countries, such as the Festival d'Automne à Paris, Bartók Festival, and Tongyeong International Music Festival, and appeared in some of the world's major concert halls, including The Royal Concertgebouw, Philharmonie de Paris, and Kölner Philharmonie. She graduated from the Tokyo University of Art with a master's degree from the Faculty of Music (where she majored in Noh "shite" of the Kanze school), and subsequently received a Ph.D. from the University of London. She was one of the the fiscal 2015 Japan Cultural Envoys appointed by the Japanese Agency for Cultural Affairs.
HP: http://ryokoaoki.net/

Noriko Baba, Composition
After receiving a degree from the Tokyo University of the Arts Graduate School, Baba pursued studies at the National Superior Conservatory of Paris for Music and Dance, where she graduated with high honors. In the 2003 academic year, she was a researcher at the Institut de Recherche et Coordination Acoustique/Musique (IRCAM). She was subsequently invited to be artist-in-residence at the Akademie Schloss Solitude for a period of one year. This was followed by a two-year residence as a member of Casa de Velazquez upon her selection under an artist dispatch program conducted by the French Ministry of National Education and a stay in Kyoto as the first Japanese national to be selected for the artist-in-residence Villa Kujoyama program conducted by the French Ministry of Europe and Foreign Affairs. She placed second in the Music Competition of Japan, and was presented with the Georges Wildenstein Award from the Institut de France and the Takefu International Composition Award. Her compositions have been commissioned for and performed at diverse musical festivals. February 2018 saw the first European performance of her "L'Oiseau à Deux Têtes" and "Hagoromo Suite," by the Royal Concertgebouw Orchestra.

Miharu Sato, Direction
Sato has directed major productions of works including "The Marriage of Figaro," "Ariadne on Naxos," "Rigoletto," "The Magic Flute," "Twilight of the Gods," "Hamlet," "Arabella," and "Turandot." In recent years, she directed a production of "The Flittermouse" staged jointly by the Tokyo Metropolitan Theater and the Ishikawa Music Promotion Foundation, and a performance hosted by the Bach Collegium Japan. She studied theater at the University of Vienna and was awarded a Ph.D. in music from the Keio University Graduate School of Letters. She refined her talents through at venues including the Stuttgart State Opera, Theater an der Wien, and English National Opera, and also worked as assistant director of the Hamburg State Opera.
At present, she serves as an associate professor at the Performing Arts Center of the Tokyo University of the Arts and an assistive technology researcher at the Research Center for Advanced Science and Technology in the University of Tokyo. She is a recipient of the 23rd Gotoh Memorial Cultural Award Most Promising Young Talent Prize in the opera division.

Yoshikazu Yamagata, Costume
Yamagata graduated from Central Saint Martines - University of the Arts London in 2005 and served as a design assistant to John Galliano before returning to Japan. He received awards in three categories in the International Talent Support Award competition (ITS#three Italy). He founded the design house writtenafterwards in 2007, and began participating in the Tokyo Collection show in September 2008. He held the opening fashion show at the Arnhem Mode Biennale in the Netherlands in 2009, and fashion shows in Australia and Austria in 2011. He was selected for the Rookie of the Year award presented by the Fashion Editors Club of Japan in 2012. In 2014, he unveiled the basic line "written by" and won the Mainichi Fashion Grand Prix. He also hosts Coconogacco as a venue for experience and learning in the field of fashion expression.

Prior to the Nopera "AOI" on Sunday 3 Novermber, the Noh performer Ryoko Aoki will give an introductive lecture about Noh itsself as well as AOI with performative demonstration. 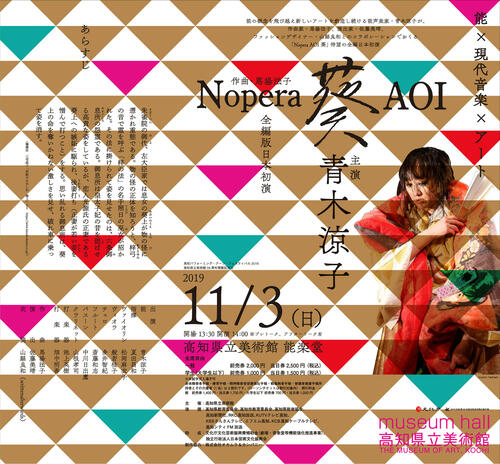 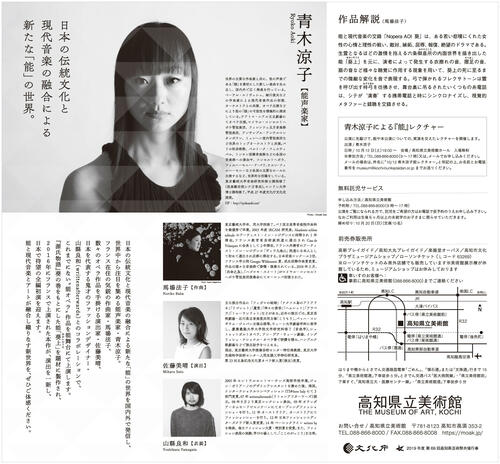 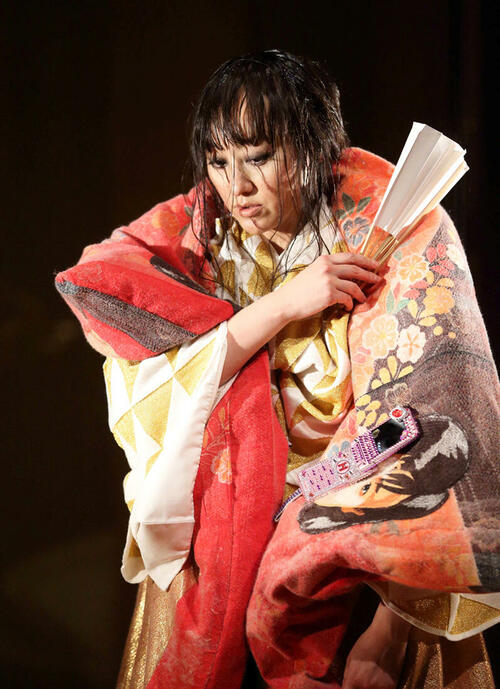 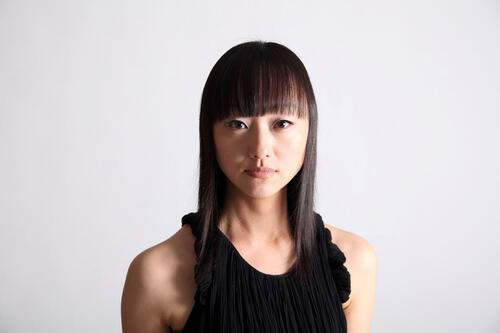 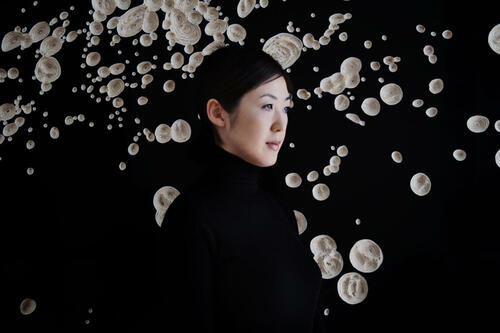 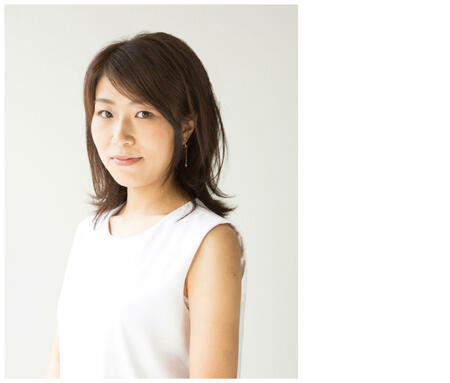 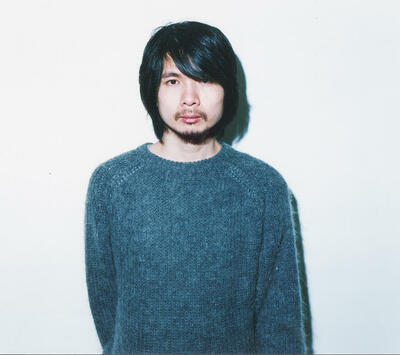 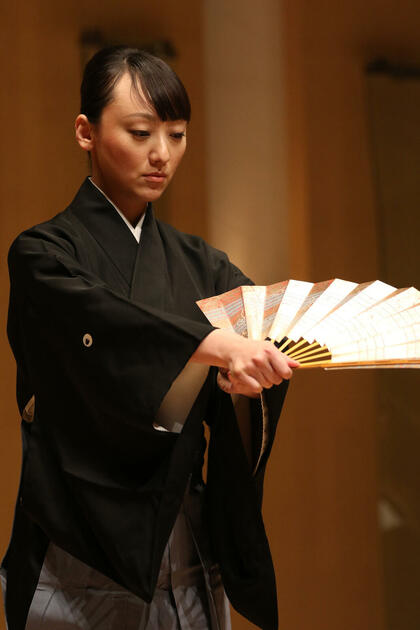